With all the time the kids have been spending helping out in the garden I thought it would be a good idea to do a few garden designing activities.

We had done the first activity before but I thought it was a great cutting and sticking activity for my youngest so we had another go at it.

The Cut and Stick Garden Plan Activity is FREE to download from Twinkl.

I really like this activity as while the kids were practicing their cutting skills they were also chatting about which plants grow in the soil, ie a vegetable patch and which ones would be on a tree, ie fruit trees like apple trees and pear trees.  We even discussed how some plants that we eat have to be dug out of the ground like the carrots and potatoes and some grow on top of the soil.

The kids actually ended up doing a few different versions.  There was a big discussion around where the paths should go.  My son first did a design with the path near the outside but then realized it was not that practical so he started creating designs with the pathways more in the middle.

My oldest also branched out and tried to make her designs with tissue paper and some pom-poms (The big pom-poms actually make really nice trees and the smaller colourful pom-poms made great flowers). 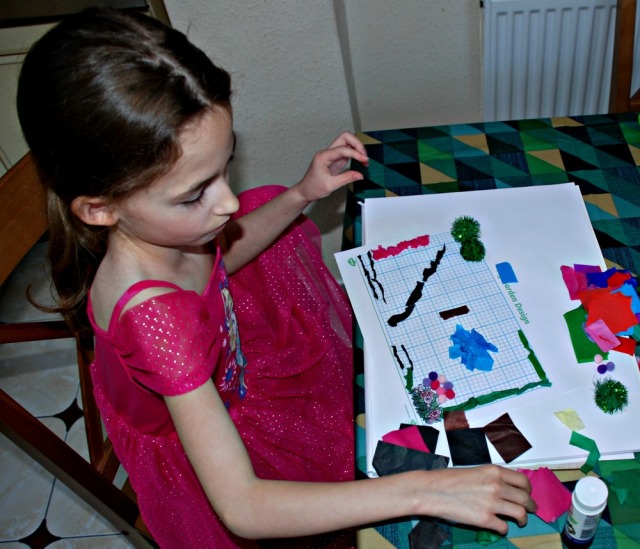 One of the finished designs.  She tried rolling the tissue paper into thin long strands to create  a fence and the brown rectangle is a bench by the pond.

And once we had finished designing our gardens my youngest even had a go at designing his own maze (using tissue paper for the hedges).  He started off creating a maze that just went one way – without any dead ends but has since moved on to creating a few with some dead ends (but that is starting to look a whole other project starting up).

Here is his first attempt – the coloured tissue paper is supposed to be flowers growing on the hedges. 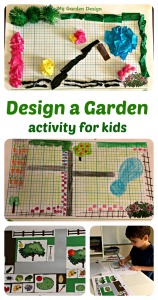 Home educating family based in the UK. We try to make learning fun
View all posts by ofamily →
This entry was posted in Art and Craft Ideas and tagged children's craft, design, design a garden, free printables, home education, homeschooling, Twinkl. Bookmark the permalink.

1 Response to Design a garden activity