Last week we unexpectedly received the first of the Dinotek Adventure Books in the post (I had requested an Anglo-Saxon book from the  publisher and they included the Dinotek book as an extra).  Now I had never heard of or seen this series before but as soon as I opened the parcel and realized it was about metal dinosaurs that come to life I handed it to my son – He loves Dinosaurs.

He started reading it and immediately informed me that it is about a young boy who discovers some metal dinosaurs while out on a school trip.  Only 1 of the dinosaurs works – although after a quick chat that 1 working dinosaur goes to sleep and does not wake up.  So the boy (Marlin) starts trying to fix the dinosaurs. He loved this a boy around his age, helping metal dinosaurs to come back to life – WOW!!

Now just from that I knew this was a winner, dinosaurs in a modern setting who talk – the perfect hook for young kids.

And as it happens the day after the book arrived we were out walking around a park and my son started pointing out “clues”.  Like  a broken fence or a branches that had been snapped off.  He informed me that he was looking for clues that the Dinoteks might have been in the park – at the end of the book there is actually a section which highlight clues that the kids can look as evidence that Dinoteks are in the area – Loved this.  The simple idea of looking for clues inspired my reluctant writer to actually start creating his own story about discovering a Dinotek in his local park – I was blown away.

And for me this is when books become really powerful – when the kids don’t just read it but they talk about it, they are inspired by the storyline and then expand on the story in their own way – could be by making up a game about the book, drawing pictures or even writing their own version. And this book has done just that for my son, he has not just read it and put it down he is thinking about it, talking, expanding on it in his own way.  It really has sparked his imagination.

The story is 106 pages and has short chapters with good illustrations.  I would class it as an early chapter book probably suitable for around 7 years – 8 / 9 years (depending on reading ability).  There is a villain in the story but he is more a bad person than someone creepy or scary.  I don’t think this would give nightmares.  It is very much an adventure story. 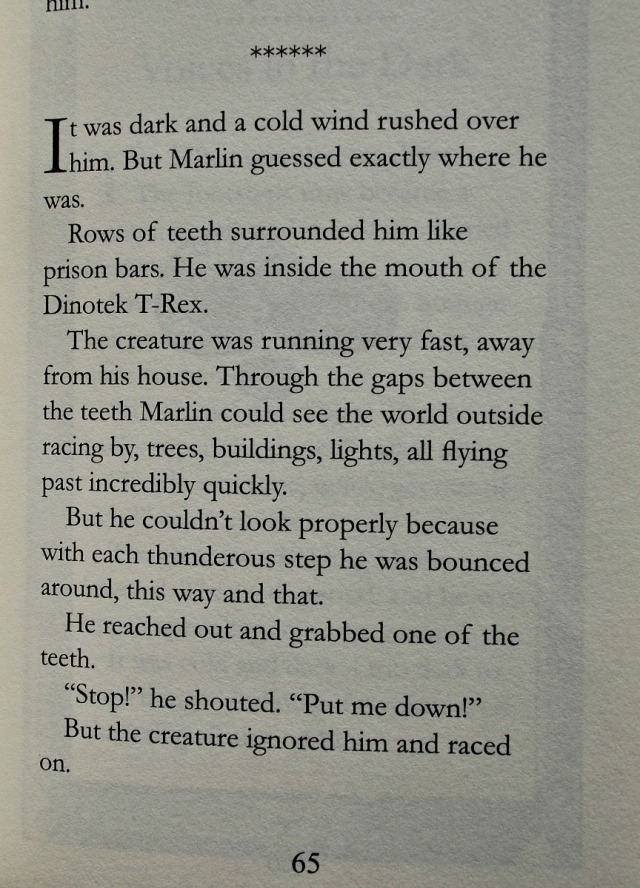 And I have searched online for the next books in the series – if you are in England I have found them at our local library (I managed to reserve the next 2 in the series), otherwise you can also get them from Amazon – The Secret Dinosaur 1: Giants Awake. (The Dinotek Adventures)

Oh and another thing I like about this series is they have created a Free to download teacher resource pack to go with it here – Dinoteks resources.

My son and I highly recommend this book.