I have mentioned a couple of time over the past few months that both my kids are loving Viking fiction stories and although the authors do manage to intertwine lots of Viking elements into the stories there is obviously still a large fiction element.  I have been wanting to cement their actual knowledge of Vikings but the couple of Viking books that we borrowed from the library just did not capture my son’s interest and he totally switched off.  We have had a lot of success with the BIG CAT readers so I thought it might be worth trying their Vikings in Britain reader.  This time he stayed interested and we read the whole book together.

The book is aimed at primary aged children (specifically Years 3 – 4).  It covers Britain from around the Year 793 until the Year 1263 and covers topics from  – what Britain looked like before the invasions began, who the Viking were, a bit about their lifestyle (their boats, homes, trading, burial) and of course the different major battles that were fought and who the most important key figures were. 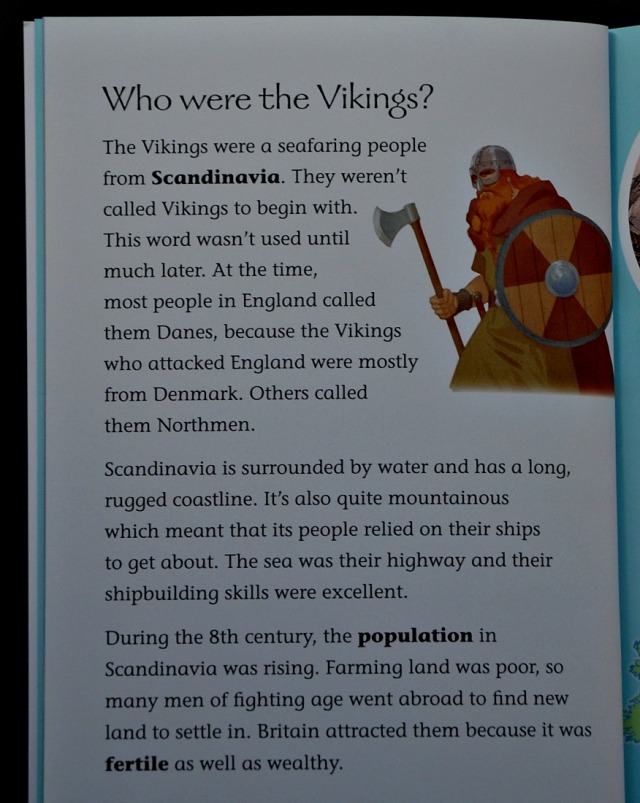 In total the book is 47 pages long.

The writing style was perfect for my son – yes there are some new, unusual words but they are all written in bold with an explanation in the glossary at the back – I actually think this is the first time that my son was actively using the glossary because he was interested and wanted to know what the words meant.

They also include some useful maps – my son especially liked the maps showing the kingdoms of Britain before the Vikings came (he kept referring back to this map) and the Invasion map. 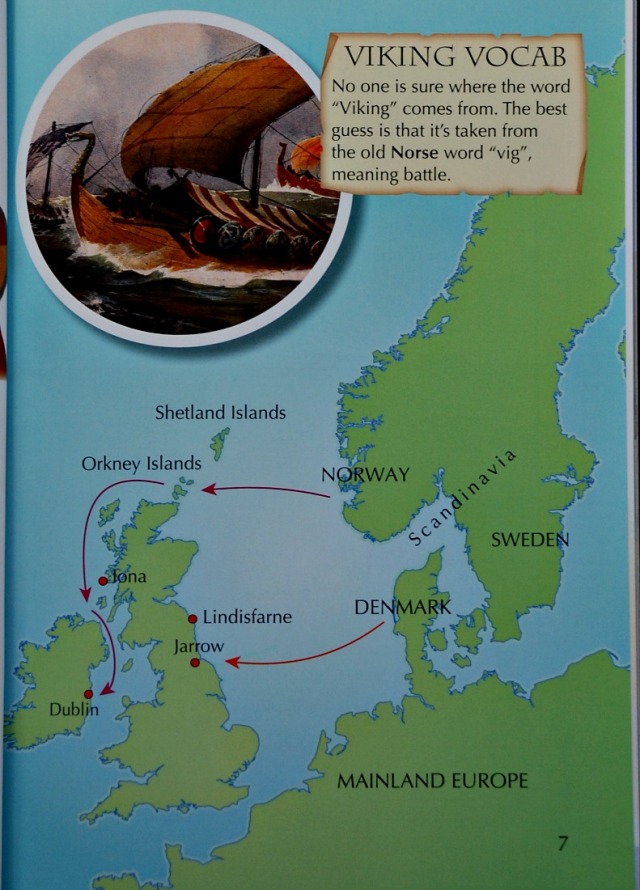 My daughter also enjoyed the book, she really liked finding which facts in the Vikings in Britain book were also included in her fictional stories – one of her stories is always mentioning Lindisfarne so she was thrilled to know it was real and that the invasion mentioned in her story actually occurred.  She also liked finding out which of the Viking lifestyle items mentioned in her stories were factual – like the longhouse – the description in the Vikings in Britain book pretty much matched the Viking Homes described in her latest story. And finally she loved the Viking Legacy page where it gave her examples of how places with certain endings would be based on the Viking settlements (needless to say she started searching our map of Britain to try to identify the names).

The Features of a Viking Longship activity – here the kids cut out the information boxes, stick them in the correct place and then create a heading for each box.

And the Free to download Viking Timeline  – it includes a number of events mentioned in a the book and a few new ones.

You can get the Vikings in Britain: Band 14/Ruby (Collins Big Cat)

1 Response to Vikings in Britain