The day the book arrived she sat down and read it cover to cover.  And the whole of that week she kept reading the book over and over again.  She was fascinated.  The book actually prompted a new interest in learning about the Ancient Romans, a topic which she had never been interested in before.   One little book (think I paid just over £5 for it) ended up being an excellent reader (had some new challenging words for her), a fascinating story book for both kids, a historical account of what it would have been like, a starting point for learning about Ancient Romans and volcanos.  So I thought it was time I wrote a proper review about this book – This is my own opinion, I have not been asked to write this.

The Book starts in February AD79 when an earthquake caused some damage in Pompeii and makes it clear that no-one took much notice of the first signs of life in Vesuvius.  It goes on to set the scene of what life would have been like in Pompeii before the eruption occurred.

Through the book it focuses on a few key figures – like the old man in the square, Pliny the elder and Actius the gladiator.  This gives the kids glimpses into the different lifestyles in Ancient Roman times. 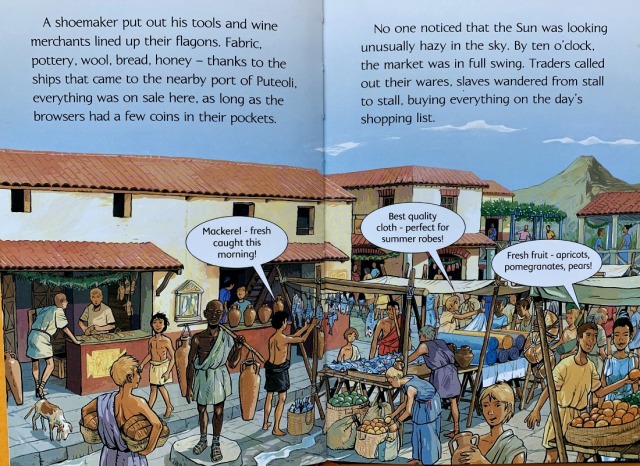 The book is also filled with stunning illustrations which depict the general Ancient Roman lifestyle (like the town square) as well as the actual volcano, its eruption and the result of the eruption on the town below it.

When it comes the actual volcano erupting the book explains how it would have happened gradually starting with rumbles.  It also explains how difficult it would have been for people to leave.  The pictures do show people dying and the text explains that most people would have actually choked to death but it was never gets too graphic.  My daughter is highly sensitive and she did not have nightmares or get scared after reading the book.

After describing what happened when the volcano erupted the book goes onto to talk about how the city of Pompeii was later rediscovered and how work progressed on the site including an interesting explanation about how they created a new way to dig out cavities (both my kids who have long been fascinated with fossils and archaeology enjoyed this extra bit of information).

At the end of the book they include some photos of what Pompeii looks like today as well as a plan of the existing ruins and a Pompeii timeline.

(All children developing reading abilities at different rates but to give an idea my daughter was 7  when she first read this book).

I have included Affiliate links. If you follow an affiliate link and go on to purchase that product, I will be paid a very small commission, however your cost will remain the same.  I only include affiliate links for products that we own, use and love.