I have been amased that our local ice-cream truck has already been back doing his rounds since the beginning of February.  My kids love it.  No matter what the weather they will always try  “can we have an ice-cream ?”

So I could not resist the idea of making our own ice-cream cupcakes.

We made our favourite cupcake mixture, spooned some into the cupcake cases and then placed our ice-cream cones on top of the mixture before we baked them.

And when they came out. 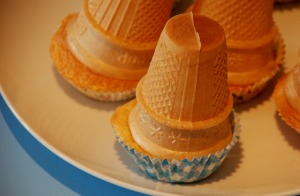 I prepared some flavours for the kids (icing sugar with some food colouring).  The kids choose the flavours that they wanted and they got going.  The flavour poster in the picture is part of the Ice-cream van role playing pack from Twinkl (Platinum).

Both my kids used spoons to add the icing but I found if you dunked the cone into the icing it worked really well. 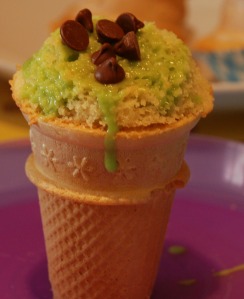 My daughter thought it was a great opportunity to sell me some ice-cream.  She used her menu and worked out the change herself.  (The menu is also part of the Ice-cream role playing pack from Twinkl).  Lucky for me the prices meant I could afford a number of her ice-creams. 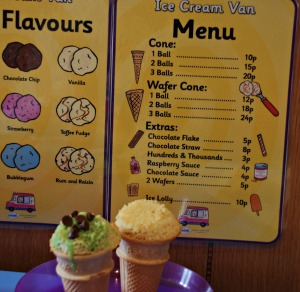 Home educating family based in the UK. We try to make learning fun
View all posts by ofamily →
This entry was posted in Baking with Kids, Homeschooling and tagged baking with children, home ed, homeschooling, ice-cream shop, role playing, Twinkl. Bookmark the permalink.