In the beginning of June we were out shopping and I happened to stop at a book store to browse through some educational books for the kids. While I was paging through a few books my daughter spotted two of the Collins Key Stage 3 History Books – Medieval Britain and Early Modern Britain and immediately asked if we could buy them. Now I must admit I normally like to read reviews about the educational books before I buy them, I don’t normally just grab some off the shelf. But my daughter had found these and thought they would they were interesting so we bought them.

As soon as we got home she was reading them – she immediately skipped ahead to the section about the Tudors (in the Early Modern Britain book) and then went back to the Medieval Britain one and started reading that one in order. She has actually now read it cover to cover (she loves History books). And she has already been using the Medieval Britain book to help when she creates her timelines. 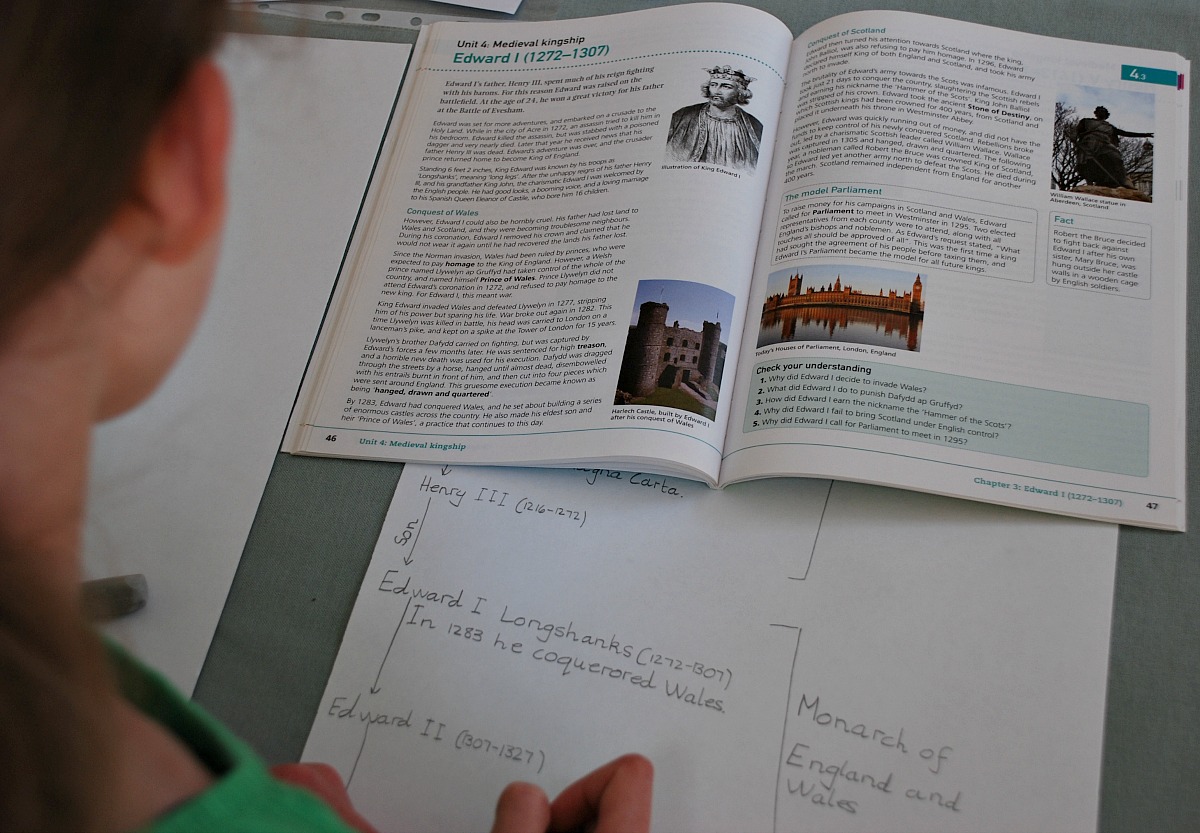 I have read parts of the Medieval Britain book – I have been using it to find information for History projects but as off yet I have not really looked at the Early Modern one. However both books follow the same format so I will give a breakdown of the set-up and what is included.

The Medieval Britain book starts with the Anglo-Saxons and goes up until the Battle of Bosworth. It divides this period into 6 units and each unit is further split into 5 double pages each of which covers a new concept relating to the unit. Each unit is roughly 12 pages long and ends with a Knowledge organiser page – which is a brief summary. I am guessing for most this would be a good year 7 history resource – for my daughter because she loves History so much and wants the detail we will need to get her additional History resources and she will cover a lot more than just this book in 1 year.  But for someone like my son this would probably be enough.

Each double page starts with a brief summary at the top and then gives the detail below along with some photographs or pictures of what is being discussed. At the bottom of the double page they have a Check Your Understanding Section – which is roughly 4 or 5 questions based on the text you have just written. (FYI – Tthey do include sample answers for these questions in their teacher guide which is free to download from the Collins website but we have never had to use it for the answers – the answers really are in the text).

Everything is set out in chronological order. So the events unfold in a logical manner and the kids get an idea of how some things build up over time.

I also really like the inclusion of their knowledge organisers at the end of each unit. This includes a timeline of that unit, along with key vocabulary and key people mentioned.

So what is included in the Units for the Medieval Britain Book?

Like I mentioned above I have not looked at the Early Modern Britain book yet but it written in the same format so I thought I would just include what it covers in case any readers are looking for something specific.

I do include Affiliate links. If you follow an affiliate link and go on to purchase that product, I will be paid a very small commission, however your cost will remain the same. I only include affiliate links for products that we use and love