We have just recently discovered the wonderful world of K’Nex sets and Wow my kids LOVE them !  I have been eyeing out K’Nex for some time but I kept putting off buying any sets as I thought my youngest (6 years old) would end up getting frustrated with them.  But he didn’t get frustrated, he loves building with K’Nex and has already asked if he can get more sets for his birthday.

and K’NEX Education Intro to Simple Machines Gears Set for Grades 3-5 Engineering Education Toy, 198 Pieces.  The Educational sets come with the normal K’Nex goodies and they also include special pieces so that the kids can create the different designs which explain the concepts.

The Levers & Pulleys set comes with a booklet which has designs for 7 different builds (my kids have already done 6 of the 7 in the booklet and all have been totally manageable for them). By simply following the instructions in the booklet, building the items and then playing around with the designs a bit both kids have really started to understand the concepts.

One of the builds included in the Levers & Pulley set was a Balance.

After it was built my youngest played around with it, he adjusted the weights on the different sides and he played with want happens when the weights are moved closer along the arm.  The more he experimented the more he started to understand how it worked. And he was able to predict what was going to happen every time he made an adjustment.

My daughter is not someone who normally enjoys building but once she  got started she wanted to build design after design and the more she built the more confident she became. She now LOVES her K’Nex and keeps asking me to download more designs from their website.

The Levers & Pulley set was a great introduction to both K’Nex itself and also how important basic levers and pulleys are in everyday designs.

The Gears Building Set was the second set we were sent and it upped the excitement level for both kids.

With the first build (the kids called it the windmill) I did have to help them with the gears, mainly because they had never built anything with gears before and did not fit the two together properly.

But once I showed them how the two wheels needed to fit together they were fine. 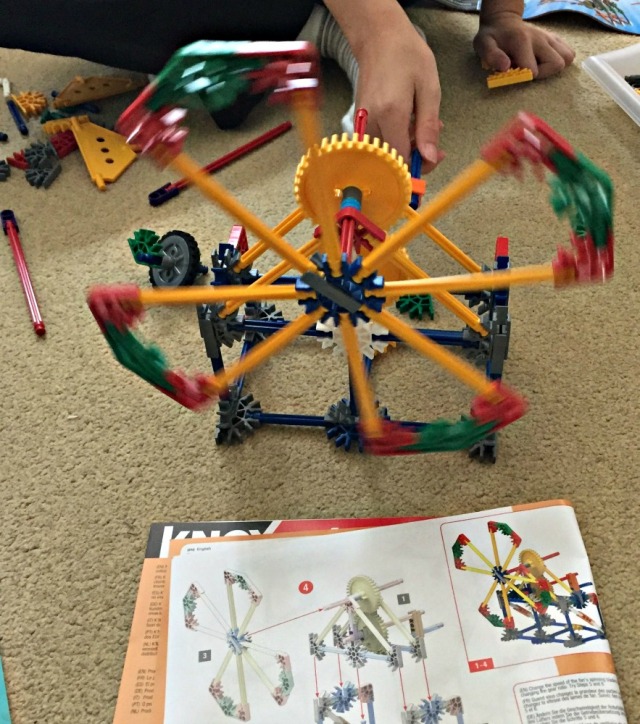 We also went onto the K’Nex website and downloaded the extra pages that go with the gears set and the kids choose to make the Eggbeater.  They loved it (I do actually have an eggbeater just like that one).  They loved the fact that the gears allowed it to move exactly the same as the one that I have.

You can actually download experiment worksheets off the K’Nex website to go along with this set (which we have downloaded) but we have not done them yet as the kids are still very much just playing around with building the designs and understanding how all the pieces fit together.

The two Educational sets that we were sent have been such big hits with the whole family that we have bought the kids a Model Building set  (K’NEX Imagine 52 Model Building Set for Ages 7+, Engineering Education Toy, 618 Pieces

) and the kids have built and built.  I must be honest I have been blown away with how my six-year old has managed the designs. He has built some fairly complicated designs and the only help he has needed is when he has to take everything apart (it can be hard to unclasp some of the pieces). 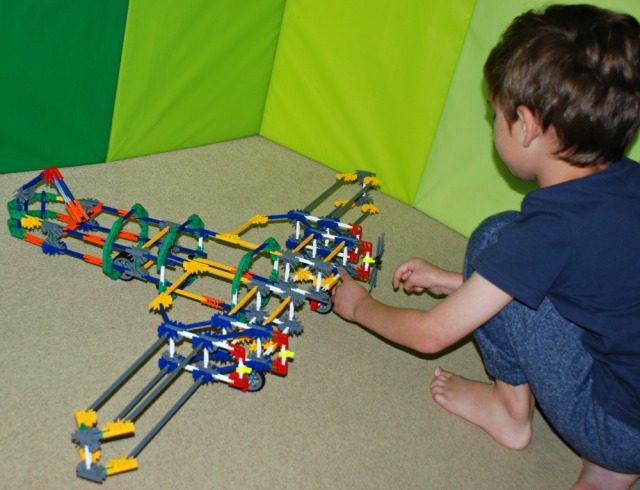 And yes I am going to be buying the kids more K’Nex in the future – more general model building sets and A LOT more of the Educational sets – both kids are keen for more gears and my youngest is eyeing out the Maker Kit Wheels Set.

I have really been impressed with out first introduction to K’Nex and their Educational sets.  It is hands-on learning at its best and is great for kids who love building things (my youngest) as well as for more reluctant builders (my daughter). 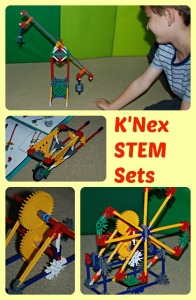 We were sent the Levers & Pulley set as well as the Gears set in exchange for us writing an honest review about the sets.

2 Responses to Learning with K’NEX