I can draw animal books

The kids have been using two animal drawing books and I have been so impressed by how much they are enjoying the books and by how their drawing confidence has improved so I thought I would share some details about the two books.

The easier book is the I Can Draw Animals (Usborne Playtime)

.  I first bought this book for my daughter a few years ago but lately it has been my son that is just loving the book.

He is following the step by step process and in most cases in coming out with a drawing which is a fairly good resemblance to the books pictures.

The kids have been doing their drawings in the evenings while I finish making their dinner (they like to sit at the kitchen table and do an activity while I am busy).  I found with this book that once he managed just one of the animals he was so excited that he wanted to try another animal and another one and another one.

We have had a few that did not work out but I have encouraged him to try it again a bit later.

The animals included in this book are the following

I think it is a nice selection and the kids seem to agree.

.  I personally think these animals are slightly harder than the first book but my daughter has not noticed the jump from the first book onto this one so I have not mentioned anything.

The animals included in this book are the following

I really like these books because they have encourages both my kids to draw and the books are set out in such a manner that the kids can do the drawings by themselves while I am busy with another activity.  I do still sit with the kids and enjoy helping them with their drawing but these books are for when I need to get on with something.

The other reason that I like these books is more from a sensory processing angle.  My daughter really battles with visual sensory input.  When she looks at something she takes in every little detail which often ends up overwhelming her and as you can imagine it can be very exhausting for her.  These books are a very simple way of trying to get her to practice focusing on just a few details – so in every step – what is different ? what has been added ?  I know for some that may sound really simple but for my daughter it has been something that she really battles with and something that she really needed to practice.  Because her brain is dealing with all the visual details that lots of us naturally filter out she often tends to miss more basic items (I hope I am doing an okay job of explaining it).

And then the end result 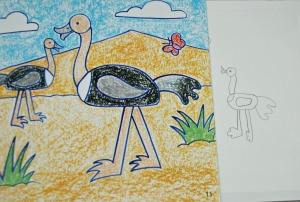 These books have been such a success with both my kids and me that I have just ordered them two new ones (I will let you know if the new ones are as big a hit once we have tested them out). 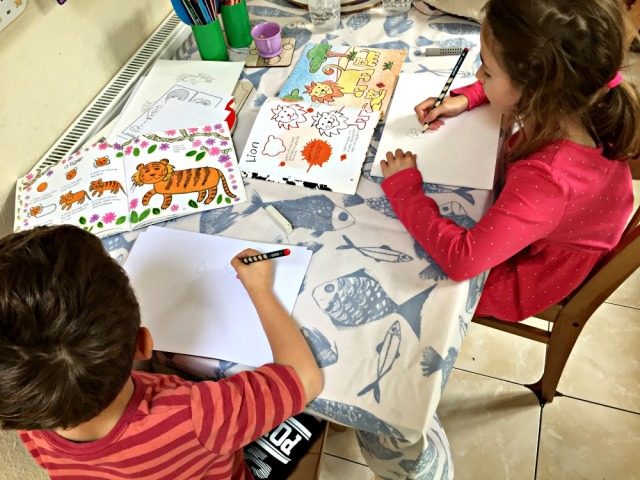 Home educating family based in the UK. We try to make learning fun
View all posts by ofamily →
This entry was posted in Homeschooling and tagged children's art, children's book, Drawing animals, home education, homeschooling, I can draw. Bookmark the permalink.

1 Response to I can draw animal books