).  The fraction towers show the fraction on one side, the decimal number on another side and the percentage on a third side so I thought let’s do the same thing but with some home-made flaps.

We started off by cutting some thick coloured craft paper that we have into fairly thick strips and then each strip was folded into three, creating two flaps.

On each coloured flap my daughter wrote the fraction (she did this in the middle ) and then the decimal number on the first flap and the percentage on the second flap.

Once she had written all the combinations we stuck them down onto a piece of A3 paper (while she was doing this she was constantly talking about the fractions and the decimals, finding patterns and noticing a few connections).

Once all the flaps were stuck done she actually started testing herself.  She turned all the flaps so that the decimal numbers were on top and then checked to see if she could remember the correct fraction for each decimal. 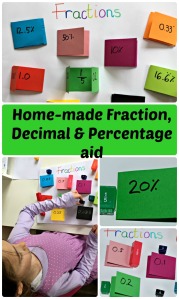 I have included Affiliate links. If you follow an affiliate link and go on to purchase that product, I will be paid a very small commission, however your cost will remain the same.  I only include affiliate links for products that we own, use and love.

Home educating family based in the UK. We try to make learning fun
View all posts by ofamily →
This entry was posted in maths ideas and tagged decimals and percentages, fractions, home education, home-made maths, homeschooling, Maths resources. Bookmark the permalink.