I think our snap cubes were one of the first items I bought when we decided to go down the homeschooling route, and they have proven to be an excellent investment in the kids education and my sanity.

We have used them in numerous learning activities over the years (old post – we love our snap cubes) but I thought I would share some of the ways we have been using them in the last couple of weeks.

I like using our snap cubes on our small kitchen table.  I normally cover the table with some paper so that the kids can write out the sums as they figure them out. I have found having the whole table covered in paper as opposed to just giving them a piece of paper encourages them to “try out their sums” and not be so scared of making mistake and crossing them out – as there is lots of place to write and rewrite the sums. 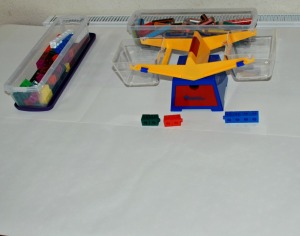 With my youngest we have been using this set up to work out basic sums.  He has been going through a phase where he is always checking with me if he has a sum correct.  In the middle of a conversation he will ask me “mummy is 2 +2 = 4 or is 10+1 = 11”.  Although his big sister mostly answers these questions for him I wanted to make sure he did some hands on figuring out for himself.  I wanted to make sure that he is not just memorizing answers but understand what it means (he has an excellent memory).

So we have done two different sums with him.  Firstly in the one bucket we will place two sets of cubes to represent a sum eg 2+2 or 3+4 etc then he figures out how many cubes he needs to place in the other bucket to “balance” his sum. 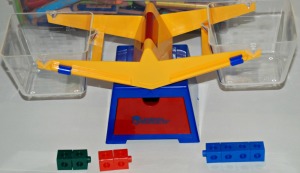 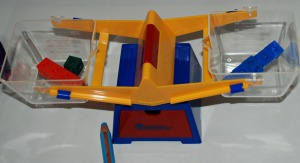 His sister started writing his sums out for him on the paper but he has now taken over doing that for himself. 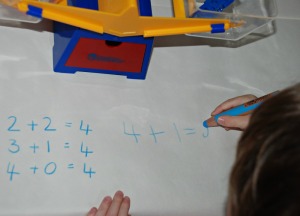 And the second type of sum we have done with him is where I place a number of cubes in the one bucket on the scale eg 10 and then he has to figure out which two other numbers will “balance 10” eg 5+5.

In the past we have used the snap cubes to represent the inverse relationship between addition and subtraction (something which we revisited again last week).  I am trying to get my daughter to double-check her subtraction sums by doing the inverse addition. 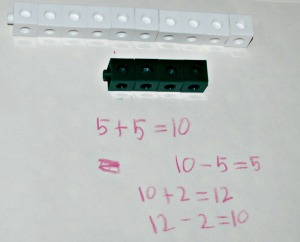 We have also used them a lot with her sums where a number is missing.  Eg 12+ what number gives you 17.

And we have used them recently to expand some of her sums. 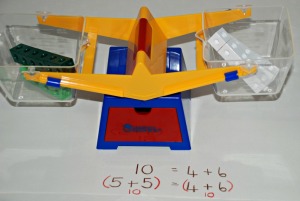 This is a concept which she has started asking me about but she was needing a visual example to help her process it properly.  She had sort of figured it out in her own head but was just not 100% sure.  Once we worked through some visual examples I think it sunk in a bit for her.  We started of by setting up the scales with a simple sum like 5+5=10.  So in the one bucket we had all 10 together and in the other bucket two groups of 5.  Then we broke the 10 down into different groups eg 8 +2 or 6+4 or 5+5 and we got our sums.  5+5=5+5 and 5+5=8+2 etc etc.  We will still need to practice this some more but I think the concept is there. 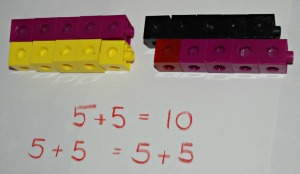 And another great thing about the snap cubes is while big sister is using them to do her Maths, little brother can still sit with her at the table and build – well he says it is a scarecrow. 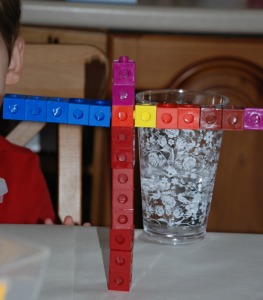 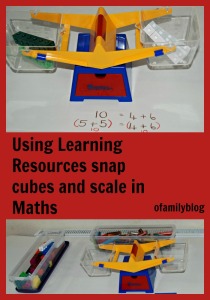