Counting and sensory tubs with some cauldron fun

I am trying to include more tactile activities especially with my youngest so today we used some sensory tubs while we practiced our counting.

I started off  with the kids mixed bean tub (this tub actually stays in the kids room as they are constantly playing with it).  The beans are a mix of corn, kidney beans, red beans and butter beans.  For this exercise I also add the kids magnetic numbers and the 0 to 20 Free cauldron number cards from Twinkl.

I also added some craft pom poms to a smaller tub which we have filled with black beans. 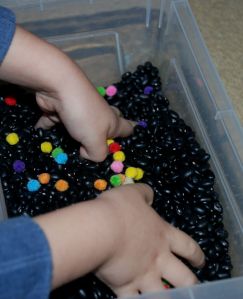 The idea being that my son would select a number cauldron card and then find the correct matching magnetic letter in the bean tub.

He would then have to dig in the black bean tub to find the Pom Poms and count out the correct number of Pom Poms. 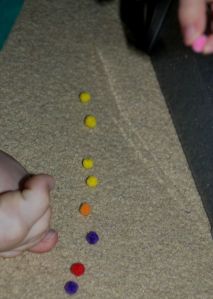 Once he was finished he would add the Pom Poms that he had counted out to his cauldron (the Pom Poms are his pretend ingredients that needed to go into his cauldron).  And if big sister wanted to join us, she could keep a running total of how many ingredients he had added to the cauldron.  He loved this and she did want to join it (so win win all around).

I was actually surprise by how long he kept at this.  He was digging his hands into the tub to find the magnetic numbers and the Pom Poms without any complaints.

I think we might extend this idea next week to include one more and one less.  After he chooses the card and selects the Pom Poms I could ask him how many Pom Poms he would have if he added one or took one away.  And we could also extend it to which number is greater.  If I got him to select two cards and count out the Pom Poms for both cards I could then ask him which number has more Pom Poms and which number has fewer Pom Poms.

I was busy making him another sensory tub to use with his phonics and a few basic CVC words but I ran out of goodies, hopefully this weekend I will get a chance to complete it and fingers crossed it will be as succesful.